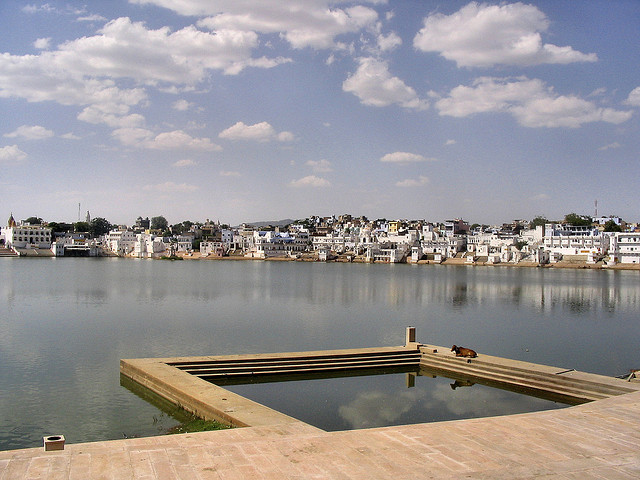 A religious holiday destination that grew around a lake and a temple, Pushkar has become famous globally as an offbeat location to be spiritually enlightened and explore the rich culture of India. Located close to Ajmer and set inside the hills, Pushkar is one of the oldest existing cities in the country. Despite its fame and legacy, it has managed to retain its small town charm through the years.

Lord Brahma, although one of the Holy Trinity according to Hinduism, only has one temple dedicated to him in the world, owing to a curse from his consort Goddess Saraswati. This temple is located at Pushkar and has been credited by International Business Times as being one of the ten most religious locations in the world. The temple is located on a higher plane, a short climb from the main Pushkar and with a view of the lake. The colourful structure features various legends circling around Brahma, as well as statue of the Creator himself in the centre.

Pushkar also houses various other temples, many of which were broken down by the Mughals during the days of Aurangzeb. Interestingly, a temple dedicated to Shiva, known as the Atpateshwar Temple, said to have been built by Brahma himself, is located alongside the Brahma temple. This temple is underground and features the Shivling with a serpent around it.

Photo by Francisco Anzola, CC BY 2.0

When the demon Vajranabha was found massacring the children of Brahma, Brahma himself battled and defeated him, with his sacred lotus flower. Three petals from the lotus flower fell on the Earth, and one of them at Pushkar, forming the Pushkar Lake. Ever since then, Pushkar has gained religious significance and various other instances have taken place here, such as the great and terrible penance of Sage Vishwamitra to gain the highest status amongst men. In much more recent history, the ages of Mahatma Gandhi have also been immersed at the lake and thus this also becomes a site to pay homage to him.

The Lake, with its 52 ghats, has been restored and added upon by rulers of Rajasthan and Ajmer over years. The water of the lake is said to have magical healing powers that can cure skin diseases.

One of the largest camel fairs in the world, and indeed a highly significant one for the locality, the Pushkar Fair is a showcase of the rich, vibrant culture of Rajasthani people. This is a five day festival held in the months of October – November and is meant to celebrate the inception of Pushkar itself by Lord Brahma. Activities at the fair include exciting and eccentric competitions such as camel and livestock exhibitions, bridal competition, longest moustache and matka phod. There is also a famous market where one can view and buy the arts, jewellery and other artefacts from the local culture. The Pushkar fair attracts crowds from across the world each year.

In a dedication to the authenticity of the Hindu scriptures, a temple has been constructed close to the Brahma temple where it said that the Goddess Savitri or Saraswati is seated in a posture that depicts her anger towards Brahma, on the highest hill amongst the surrounding ranges, the Ratnagiri hill, at the Western end of the lake. Pilgrims to the temple have to undergo a one hour trek, which is recommended due to breathtaking views of the lake and the surrounding hills to be had.

Another temple called the Pap Mochani temple, depicting the apologetic attitude of the Gurjar girl Gayatri, whom Brahma had to take for his wife temporarily, is located on the extreme opposite side o a lower hill.

Pushkar as a city has sprung up around the lake and Brahma temple. Thus, keeping in mind the needs of the pilgrims that flock here by the hundreds each day, Pushkar has come up with charming resorts and a bustling market filled with local handicrafts and other wonders are available. This market is filled with small cafes with a variety of simple foods from international cuisines such as Israeli, Italian and French to choose from. Of these cafes, the Sunset Cafe, located strategically on the opposite bank of the lake from the temple, and offering a breathtaking view of the lake, along with comfortable outdoor seating and a delicious menu. A must try at this cafe is the German bakery, which offers a mouth watering variant of the cheesecake.

Pushkar is a unique city, which is hugely significant and a spiritual journey but still a well kept secret which only true devotees know of. Although small, this place has a lot of offer any visitor.