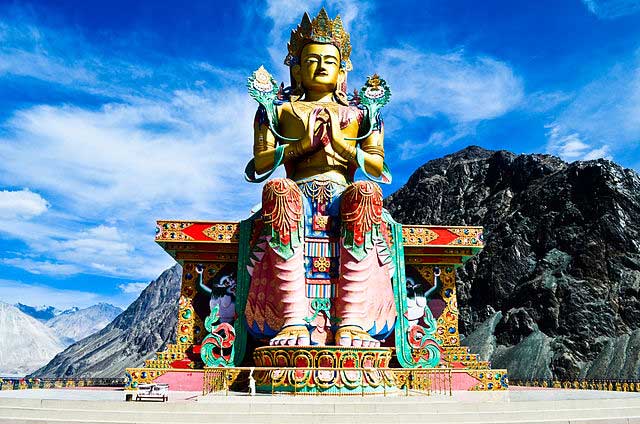 India is a place of great religious, cultural and historical importance. Buddhism is one of the many major religions practiced in India, which is followed all around the world. The significance of Buddhism is seen in every part of the country, and it is given great importance to throughout. There are various locations for pilgrims all over where devotees are found in a large number. These locations, while being great pilgrimage sites are also tourist destinations, and attract them in a large number all through the year. Below are some of the important Buddhist pilgrimage locations in India.

With the famous Mahabodhi Temple in its vicinity, Bodh Gaya is a place of most significance to the followers of Buddhism. It is the location where the Buddha attained Nirvana —enlightenment— under the Bodhi tree that is also located in the temple complex. Emperor Ashoka is known to be the founder of the Mahabodhi Temple, and it is occupied by many Buddhist monks throughout the year. Bodh Gaya holds a lot of religious importance for Buddhists, and is also a popular tourist location.

Found close to Varanasi, Sarnath is another place of Buddhist significance in India. It is the spot where the Buddhist Sangha has its inception after Gautama Buddha initially established Dharma. It is said that every devotee visits Sarnath at least once in their lifetime due to its vast religious importance. After attaining nirvana, Gautama Buddha visited Sarnath from Bodh Gaya, which is a major cause of its religious significance. Pilgrims are found in a large number at Sarnath after Bodh Gaya.

The existence of a vast Buddhist monastery in the Magadha kingdom (present Bihar), which prospered under the reign of the Guptas, is widely known as Nalanda. It is considered as a University by historians, and is a seat of great learning in India. What remains today are the ruins of this university, but the religious importance that it holds for Buddhists is quite widely spread across the world. Buddhists all over recognize Nalanda as an important pilgrimage destination.

This ancient city came to be recognized as an important one after Gautama Buddha visited it during his time. Sankassa houses one of Emperor Ashoka’s pillars that have been erected in various other parts of India. There are ruins of ancient Buddhist monasteries, and is of great religious importance to Buddhists. It is said that the Buddha returned to the world at Sankassa and so it holds fair value in the Buddhist culture. People from India, Nepal and other parts of the world visit Sankassa due to its history of Buddhism and the various legends it holds.

Kashmir’s significance in the spread of Buddhism has been invaluable through the years. The various monasteries located in and around Kashmir are regarded of great religious worth. During the time of Emperor Ashoka, Buddhism flourished in the area of Kashmir, and it is said that it began even before Ashoka’s reign. Kashmir has seen the rule of various kings after Ashoka namely his successors, the Kushana etc., under whose patronage the growth of Buddhism fluctuated according to the kings and their administration. However, to this day, Kashmir remains a location of immense Buddhist importance.

Following Kashmir, Ladakh also became a place of Buddhist importance. Tibetan Buddhists are found in a large number in Ladakh due to the fact that Buddhism has been reigning in this location since the 3rd century B.C.E. Like Kashmir, Ladakh also has a lot of Buddhist monasteries all around, and it attracts tourists and devotees on a vast scale. Buddhist monks find solace in the peaceful monasteries, which are said to have existed for a very long time. After a time of fall in Buddhism due to political reasons, it was revived in Ladakh along with that in Tibet soon after what is known as the Dark Ages.

The spread of Buddhism in India is very well-known all over the world, and it has attracted Buddhists and tourists greatly through the ages. All these important locations are notably valuable for the religion established by Gautama Buddha, and pilgrims consider these places highly.